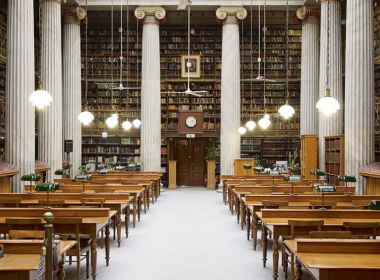 World-famous, the stunning Athenian Trilogy – the three elegant buildings on Panepistimiou Street – stands above the scramble of one of the city center’s busiest thoroughfares. Designed in the mid-19th century by the Danish Hansen brothers and completed years later with the help of benefactors and donors, these buildings have seen it all: from the urban planning visions of King Otto and the star architects of the time, horse-drawn carriages making way to trams and later cars, to apartment buildings popping up on all sides and the evolution into a metropolis of today.

A union of vision

Our tour of the neoclassical Athenian trilogy begins in the forecourt of Athens University, the first of the three buildings to be constructed, in 1864, by the Danish architect Christian Hansen and the one that gave its name to one of the busiest streets in the city center, Panepistimiou (University street). Before the famous Great Hall of Ceremonies, the aula, you can look up to marvel at the colorful murals in the portico, one of its most impressive elements. Financed by wealthy benefactors Simon Sinas and Nikolaus Dumba, the mural was designed by Austrian artist Carl Rahl and executed after his death by Polish painter Eduard Lebiedzki. At its center it depicts King Otto, the building’s primary donor, surrounded by the arts and sciences personified in classical attire.

Inspired by the Propylaea of the Acropolis, Hansen’s Academy was the result of the efforts and talents of many artists, including those of architect Ernst Ziller, a student of Hansen’s; sculptor Leonidas Drosis, responsible for the pediment above the entrance and the statues of Athena and Apollo on the flanking pillars; and Christian Griepenkerl, who painted the building’s hidden treasure, the pictorial ensemble in the meeting hall.

The 50m-long colorful mural, based on designs by Theophil Hansen and inspired by Aeschylus’ tragedy Prometheus Bound, depicts the Passions of Prometheus and reads like a story, starting from the prophecy about the theft of fire by Prometheus and ending with his reception by the gods on Mount Olympus.

The National Library, created by Theophil Hansen in order to complement the Academy on the far side of the University, has been housed here since 1903 with a mission to preserve Hellenic intellectual heritage.

Beyond the lobby lies the reading room, where you are welcomed by the smell of old books, more of which are stored behind closed doors in the building’s side wings. The library is home to an impressive body of knowledge, including the first printed book in the Greek language from 1476.

The sun streaming through the skylight gives the reading room a somewhat imperial atmosphere and highlights its elegant marble Ionic peristyle and furnishings. The original tables and chairs, as well as the unusual cast-iron bookstands and galleries around me, are still in use and were designed by Ernst Ziller, a student of Hansen’s, who supervised the Library’s construction.